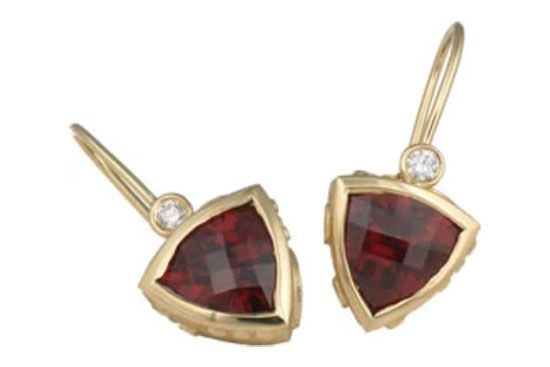 Today, Garnets are used as abrasives. It is the state gemstone for New York. Garnets are believed to regulate heart and blood flow. In early times, Garnets were exchanged between friends to demonstrate their affection for one another, and to insure that they meet again.

Garnets, although typically thought of as a red gemstone, and indeed, the red Almandite and Pyrope varieties are the most common, come in a wide range of colors. I most often use their bright green cousin, the Tsavorite Garnet, in my designs. The color resembles emerald, but with its higher refractive index and clear clarity, tsavorites are much more lively and durable. They are also less expensive. Tsavorite is named for its location, Tsavo Park, Kenya, where it was first discovered in the 1960’s by the adventurer and gem explorer, Campbell Bridges.  Red pyrope garnets, from Arizona, are mined by the world’s tiniest miners, ants. The desert-dwelling ants build large underground labyrinths, carefully excavating pebbles and sand from the tunnels thus creating outside mounds, or “ant hills”. Many of the pebbles they move are small, red pyrope garnets. Land owners stop by the ant hills and pick up the red crystals. They are then cut and polished into brilliant gems called Ant Hill Garnets.

Another rare green garnet, I favor, is the Demantoid Garnet. Typically found in the Ural Mountains of Russia, this grass green garnet has sporadic availability in the market due to extreme weather conditions. The demantoid, like its name implies, has a “diamond” like appearance due to its high refractive index. It is identifiable by its golden “horse-tail-like” inclusion visible with a microscope. Demantoid garnets were available in the late 1800’s, early 1900’s and often found their way into “suffrage” jewelry when paired with purple and white stones such as amethysts and pearls. Large demantoid garnets are rare, and much sought after by collectors.

Spessarite Garnets, now being found in the Madagascar, have a distinctive orange color ranging from pumpkin to orange citrus fruit. These very lively stones, like other garnets, hold their color well in small sizes. I like to mix them with rubellite tourmalines or brown, cinnamon zircons.