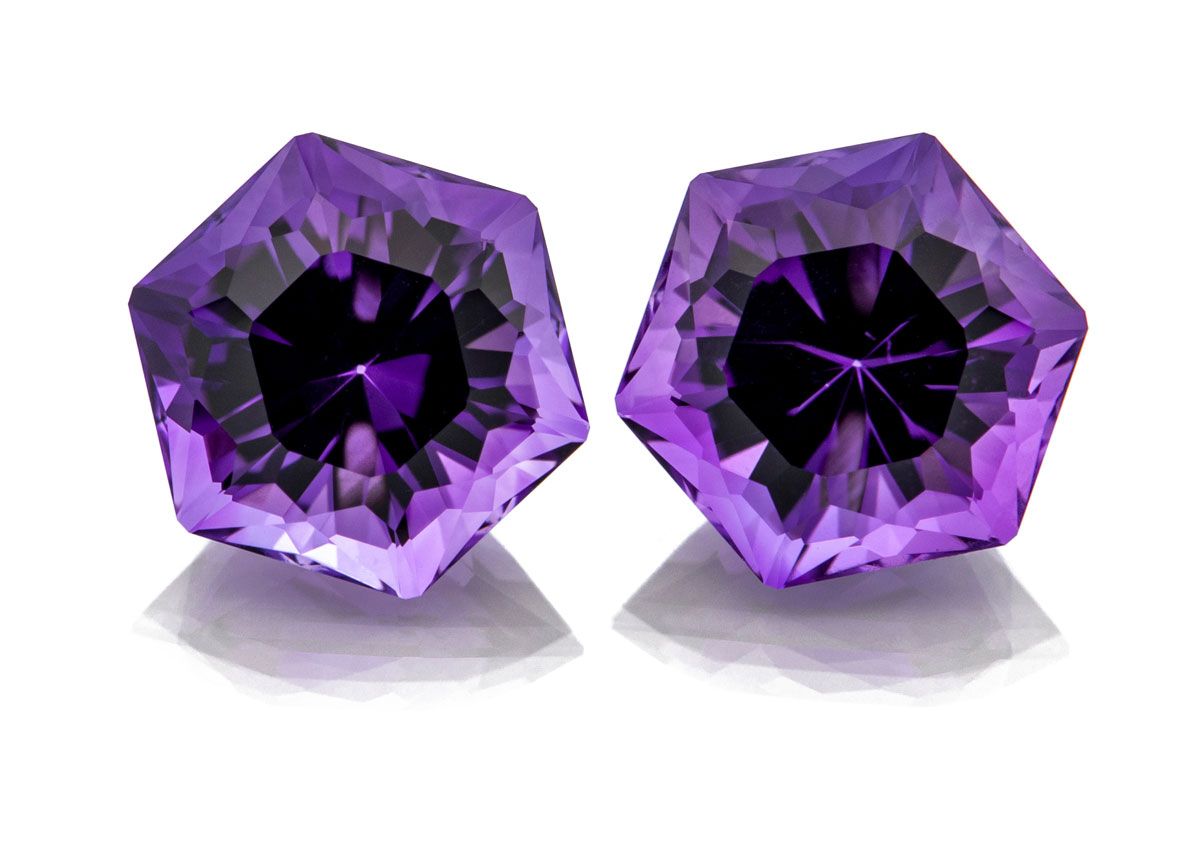 The regal amethyst has been associated with royalty for centuries, and as one of my favorite gemstones, it has been a part of my company identity for decades. Many gems lay claim to the title Queen of Gemstones—emerald, opal, pearl—but amethyst is the undisputed Queen of Quartz. Let me share my love of February’s birthstone.

Before the 19th century, amethyst was as rare and expensive as emerald and ruby. Those three gemstones along with diamond and sapphire comprised the five cardinal gems, the gemstones that were valued above all others. Aside from its rarity, amethyst was prized for its color. Nobles preferred darker amethysts, whose red-tinged shade of purple was the color worn by Roman emperors and Medieval monarchs. With their balanced blend of cool blue and warm red, it’s easy to see why these darker-colored amethysts were so beloved. It’s one of my favorite colors, as well! Such amethysts can be found alongside emeralds and sapphires in the crown jewels of many European kingdoms.

Outside of Europe, the ancient Egyptians were carving protective amulets out of amethyst as early as 3000 BCE. Archeologists have uncovered amethyst scarabs in the tombs of figures such as Tutankhamen and Mereret, daughter of Pharaoh Senusret III. The ancient Egyptians got their amethyst mostly from Nubia, a region of Africa south of Egypt in modern-day Sudan.

As it appears in a wide range of purple hues, from nearly white to lilac to violet to raspberry, it’s easy to see why the ancient Greeks associated amethyst with Bacchus, the god of wine, and attributed anti-hangover properties to the gemstone. This belief is reflected in its name, which means “not drunk”: methuo means “I am drunk,” and the prefix a- means “not.” I’m not sure I’ll be replacing a glass of water with an amethyst any time soon, though.

Orange carnelian and citrine, black onyx, and green aventurine are all beautiful and treasured varieties of quartz, but amethyst is the most valuable variety of that mineral. All types of quartz have the same chemical composition—silicon dioxide (SiO2)—but the presence of traces of different elements result in different colors. Quartz becomes amethyst when trace amounts of iron trapped inside the quartz crystal are exposed to gamma rays. But don’t worry! Amethyst isn’t radioactive. Many gemstones get their color from exposure to small amounts of radiation over the course of millions of years as radioactive elements decay deep within the earth. (This principle has been harnessed by science, and some gemstones are safely irradiated in a laboratory to enhance their color.)

Amethyst is mined all over the world, but gemstone-quality amethyst is rarely found in quantities large enough to sustain any sort of large-scale mining operation. This is true in the US, as well: the Four Peaks mine in Arizona is the only commercial amethyst mine in the country. The finest amethysts can be found in Siberia and Brazil, and it was the discovery of amethyst deposits in Brazil that made the mineral widely available and affordable. In the old mining town of Ouro Preto, high in the mountains of the state of Minas Gerais, Brazil, one can find amethyst for sale in just about every shop and outdoor market, from cut gemstones to carved figurines to massive geodes larger than a child.

Siberian amethysts, mined in the Ural Mountains, were a favorite of Russian monarchs like Catherine the Great. The Siberian variety is the most prized of all, but it is important to note that in modern nomenclature, “Siberian Amethyst” refers not to its region of origin but to any amethyst with a rich red-purple hue most associated with amethysts from Siberia. No matter where it comes from, Siberian amethysts are the rarest and most valuable of all amethysts.

Though the large deposits discovered in Brazil in the 19th century significantly reduced its rarity and value, amethyst remains one of the most alluring and expressive gemstones in existence. It grows in very large crystals—large enough to carve a drinking vessel out of, as the ancient Greeks did—and throughout history, artisans have expressed their creativity through the medium of amethyst, from Egyptian scarabs to Roman intaglio rings to whimsical Art Nouveau carvings. Because large amethysts are so affordable, you can go big and make a statement with a bold and creative piece of amethyst jewelry.