It’s only the beginning of March and summer still seems a long way away, but this month’s birthstone, aquamarine, will transport you to the deck of a ship on some tropical sea, surrounded by clear skies and clear waters, embraced by the warm sun and a gentle breeze.

One of the astronomers who first observed the pale blue planet beyond Uranus likely did not have aquamarine in mind when he suggested naming the planet Neptune, but a blue aquamarine cabochon bears such a striking resemblance to the gas giant that it’s easy to see why they are both associated with the sea. While the sea can be forceful and chaotic, it can also be peaceful, calming, and healing. There is a real sense of tranquility in the clouds of Neptune as well as in aquamarine, whether cut and faceted, polished, or in its natural crystal form. It is why the ancient Romans called the stone aqua marina (meaning “sea water”) and believed that this placid blue gem would bring them calm seas and safe sailing. 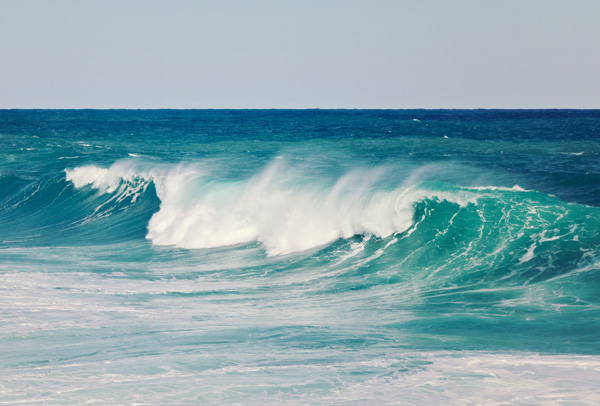 Sailors weren’t the only ancient Romans to use aquamarine. The Roman philosopher Pliny the Elder, who had a lot to say about gemstones, wrote of the healing power of aquamarine, reporting that it could repair failing eyesight. This belief may be due to the fact that clear beryl was often used in spectacles in a time before the science of optics and the art of the glassmaker could produce suitably accurate glass lenses. The Romans also used it to alleviate bloating and stomach pain.

The belief in aquamarine’s protective properties continued into the Middle Ages, where it was said to protect against poison. It has long been a traditional gift in Buddhism given by a husband to his wife to promote a happy marriage, and in the Middle Ages, Europeans began giving aquamarine as a wedding gift, believing the gemstone would foster fidelity and happiness in marriage.

Like emerald, aquamarine is a variety of the mineral beryl, or beryllium aluminum silicate (Be3Al2Si6O18). Pure beryl is colorless. Whereas emerald is the name given to the deep green variety of beryl, aquamarine is its pastel greenish blue variety. The difference in color lies in the types of elements trapped in the beryl crystal. Trace amounts of chromium, vanadium, and iron will produce a green emerald, while the presence of iron alone in the beryl crystal is responsible for aquamarine’s blue-green hue.

Aquamarine crystals can grow to enormous sizes. The largest ever recorded, mined in Minas Gerais, Brazil, was 19 inches long and weighed an incredible 244 lbs. Though named for the sea, the pastel blue appearance and the clouds of white inside the crystal make it look like a piece of the sky captured in glass. These crystals are beautiful in their natural state and are a favorite of mineral collectors. 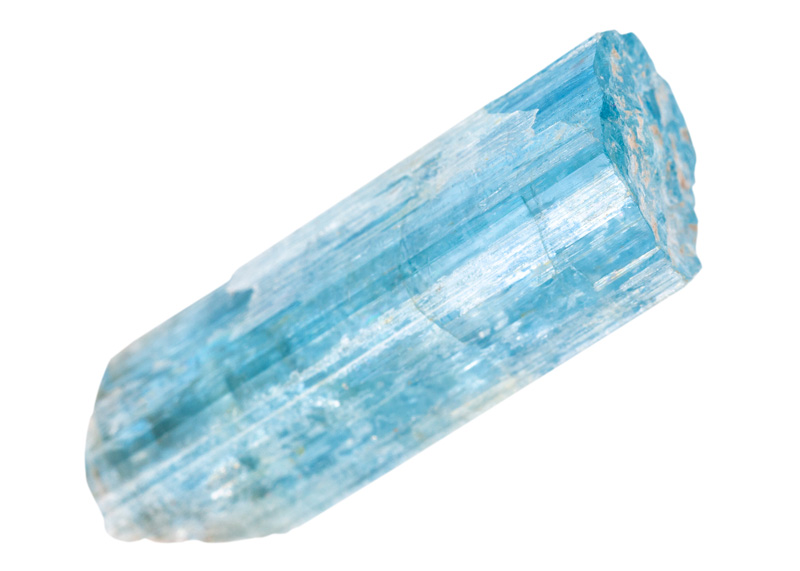 Its large size and hardness (7.5-8 on the Mohs scale) make it a fine medium for engraving. The ancient Greeks often carved intaglios into aquamarine. It can also be cut into a variety of imaginative shapes, as in the case of Japanese netsuke, miniature sculptures as small as three inches originally crafted as ornate button-like fasteners.

These large crystals aren’t always perfect for cutting and faceting equally large stones, as they can be extremely included. But the inclusions bring their own unique beauty to aquamarine, and such crystals are often shaped and polished into round cabochons. When the inclusions take the form of long, liquid-filled tubes, the crystal can be fashioned into a cat’s eye. It is this type of beryl that captured the imagination of miners in ancient India, as chronicled by Buddhabhatta in the 6th century.

Though unusual, it is possible to find crystals large and clear enough to cut truly massive gemstones. The largest cut aquamarine, also from Brazil, weighs in at 10,363 carats. The crystal from which it was cut was even bigger, but the miners who found it dropped it, breaking it into three pieces. While such a massive gemstone is clearly an outlier, the average aquamarine gemstone can still get pretty big. Lucille Ball’s engagement ring is perhaps the most famous example of a large aquamarine gemstone set into a ring. Hers was possibly a 30-carat (or more!) gemstone. 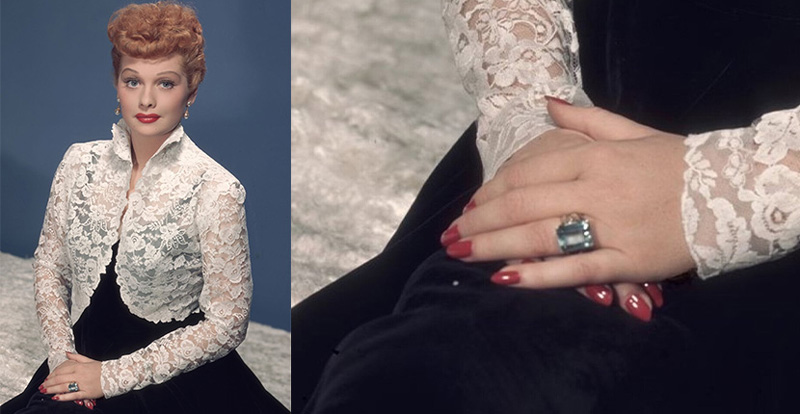 The ring was as much a staple of her look as her bright red hair and her blue eyes, which the ring matched perfectly. Large cocktail rings were all the rage in the 1940s, but wearing one as an engagement ring was a unique choice. It just goes to show that an engagement ring doesn’t have to look a certain way; it just has to be meaningful to the wearer.

Though a cocktail ring is an interesting choice of engagement ring, aquamarine has become one of the most popular engagement stones. With its connotations of peace, tranquility, fidelity and clarity, it’s easy to see why. But it’s also a fine choice for anyone who wants to keep a piece of the sea, and all it represents, close to them at all times.