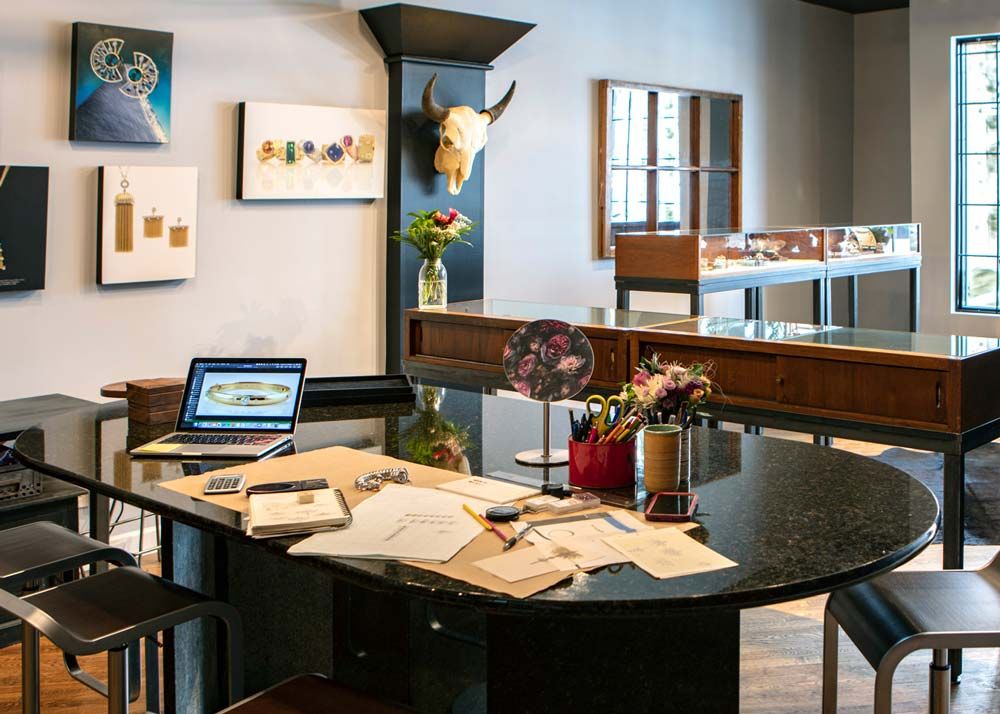 This article was originally published in "INSTORE Magazine," on August 31, 2021.

This Must Be The Place

A visit to Ellie Thompson + Co. is a mix of magic, whimsy and adventure, the perfect setting for the jewelry designer's inventive collections.

The windows are painted regularly by an artist to tell seasonal stories. A shade garden adds warmth and curb appeal out front. Inside, sterling silver jackalopes, designed by Thompson, hide among miniature ferns. Jewelry pieces, including a snake, pop up on plants and natural stone surfaces, lending them an organic air. A magical rose motif adorns one wall.

Thompson’s jewelry and her space work together to tell an enchanting story of creativity. As a jewelry designer, Thompson’s first forays into retail sales were more about pop-ups than permanence. But when she took a step back to think about what she liked to do best, her experience working with clients who were going to wear the jewelry she created was the most rewarding. “You don’t really get to do that in the wholesale environment,” she says. 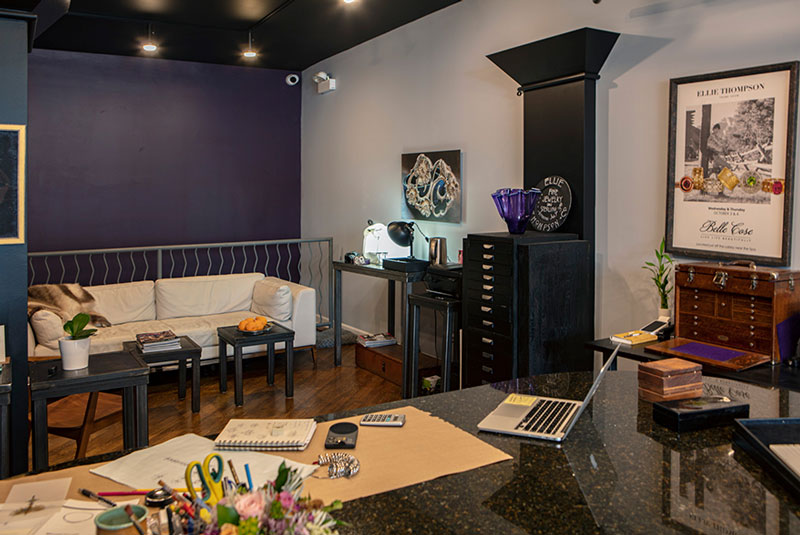 A comfortable couch is just one element that has proved inviting to clients tempted to linger.

She began looking for a spot for a store in 2019, but nothing seemed quite right. Ultimately, the space on the north side of Chicago chose her, she says, when a friend with a commercial condo space in Roscoe Village invited her to rent the storefront. With its mix of restaurants, boutiques and professional offices, the street has the feel of a small-town main street.

As soon as she saw it, she could visualize its potential. “I said, ‘Yep, I’ll have it open in four weeks. I’m calling the painter this afternoon.’ It was really exciting, getting it ready.”

The space came with a large granite table and a white couch around which everything else fell into place. “The lighting was already installed in the perfect places,” she says. “I didn’t have to put in one track. I just changed lightbulbs. It was so close to turnkey. And it’s absolutely me.”

After she’d been in it a few months, her vision of what it could look like expanded. She designed furniture and fixtures that were made by Polaris Metal Works, and then made a trip to the Pioneer Mountains of southwestern Montana to pick them up. She added a movable wall. The custom carbon steel case frames and tables were designed with interchangeable legs of different heights to provide flexibility. This allows her to redesign the entire store in an afternoon. Says Thompson: “I love being able to move things and create a look for an event or for a season.”

The interior melds rustic Western American artifacts and urban industrial design with plants and romantic touches. Despite its distinctive custom look, this perfect place came together on a budget of less than $5,000.

Thompson went right to the source — the guy with the torch, she says — to make the carbon steel cabinets, and since she drove them back from Montana herself, she didn’t have to spend thousands of dollars on freight.

Security bars on the windows fortuitously resemble French paned windows. And there was a 12-by-12-foot plot of dirt for her shade garden, which may soon have a fountain.

“Most of my customers are people I’ve known in the past 20 years, then people in the neighborhood and their referrals,” says Thompson. “There’s a group of women who know each other very well and have come to the store for friends’ birthday gifts. They’ve all bought things for themselves as well.”

Thompson began her career in jewelry working for British goldsmith Derek Simpson in New Haven, CT. Inspired, she studied gemology at GIA. Soon after, in Chicago, she founded the appraisal firm, the Chicago Gem Lab, consulting with individuals as well as Sotheby’s, Christie’s, Butterfields and Leslie Hindman Auctioneers.

One thing she learned in wholesale that has served her well is how to manage production by anticipating what customers will need restocked, an insight she brings to her own retail enterprise.

Thompson designs all of the jewelry in the store, which is made in her manufacturing shop in Chicago, with the exception of pendant chains and leather goods. Her use of rare and unique gemstones such as gray spinel, yellow zircons and demantoid garnets gives her work a distinctive look.

Although Thompson moved into e-commerce reluctantly, with a measure of skepticism regarding buyers she doesn’t know, she has discovered that it makes it easier for people she already knows to find her work. “People I know from the bike community see my Instagrams. Someone will send me a DM saying ‘I like this ring,’ and all of a sudden I have a $3,500 sale from someone I do know.”

Thompson feels equally at home in Chicago and in Montana, although the idea for belt buckles was born out West. The idea of the West was an early inspiration for her. “Even though I didn’t go out West till I was in my 40s, I have worn cowboy boots since I was 16 years old in New Haven, Connecticut,” she says. 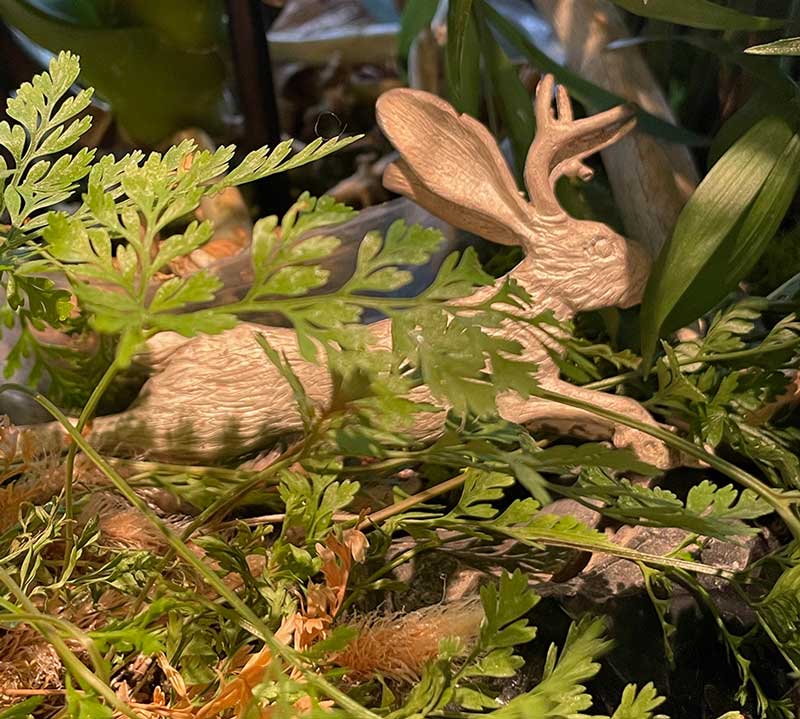 She designed her first belt buckle when her 2008 jewelry collection, American Metaphor, seemed like it was crying out for one. “I really liked working with the larger format,” she says, and she believes that she has something unique to add to the genre. Traditionally, Western belt buckles are curved and flat. “All of mine are sculptural hand-carved waxes and come off the belt further. The ram skulls and bison skulls are really shrunken to scale complete with the teeth and attached to the buckle. And with the open work, you can see the leather strap through my buckles.”

While she hopes to work with a gallery in Missoula, MT, she has no plans to cut ties to Chicago. “All the times I was traveling out West, I was always home in January because I didn’t want to miss a Chicago winter,” says Thompson, who finds the icy, dramatic landscape beautiful. “Icebergs take over the tops of the sand. Dunes are made out of snow and ice. There’s no such thing as bad weather, just bad clothing.”

She’s working on ways to tell her own story, particularly in blog form, to further define her hyperlocal, one-on-one approach to marketing. “That plays to my strengths because I want to work with the guy down the street and get to know his family, to learn about what kind of jewelry his wife has and to be able to say, ‘These are the kinds of things that would go well with it.’”

Try This: Do Your Own Photography.

“Think about props,” says Thompson. “Figure out how you can capture a tiny piece of your store in a jewelry photo.” (Thompson uses plants and other organic elements.) Next, understand where gravity is in a photograph. “If it’s a pendant and it looks like it’s floating, people are uncomfortable with that,” she says. Lastly, buy the iPhone 12, she recommends. “When it’s quick and easy, you’re more likely to do it.”