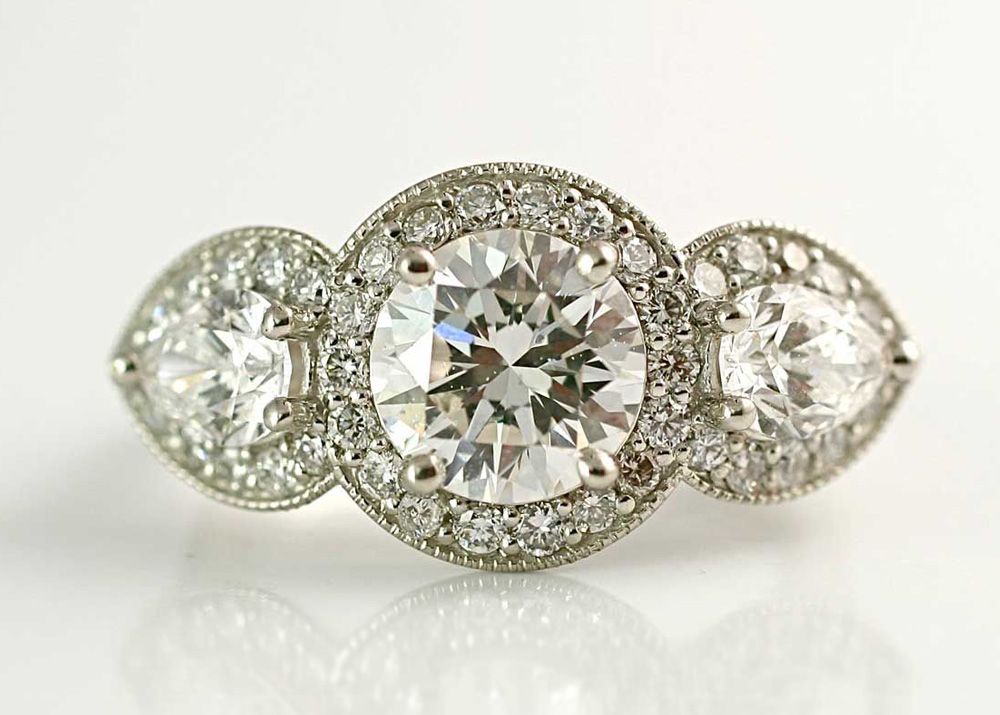 A rough diamond looks cold to the touch, like a tiny shard of ice. To a 5th century BCE alluvial miner sifting through the sand and gravel of the Krishna River in India, a sparkling diamond crystal must have seemed like something that fell all the way from the icy reaches of the Himalayas. But as we now know, they’re actually produced in the most fiery of conditions, deep in the churning mantle, where extreme pressure turns solid rock into very hot jelly.

That heat and pressure is enough to melt down and rearrange carbon atoms, normally arranged in a flat structure, into a three-dimensional crystal lattice, thus producing diamond. Rather than falling like snow from a freezing sky, they are pushed up to the surface by the slow movements of the Earth’s crust and explosive volcanic eruptions.

From ancient India to Victorian England to the modern United States, India, and China, the diamond has only grown in popularity over time. It’s not only the hardest natural substance we know of; it’s also the hardest gemstone to write about just because its impact on popular culture has been so vast. Let’s take a moment to celebrate April’s birthstone, the diamond.

From the Krishna River to James Cameron

Throughout much of history, diamonds were virtually unknown outside of India, but the difficulty of translating ancient texts makes it hard to know exactly how unknown they were. The ancient Greeks made reference to a mythical hardest material, which they called adamas (“invincible”), the word from which diamond derives. Various references to similar mythical substances in the Bible and other texts are often translated as “diamond.”

Through their extensive trade networks, the Romans were well-acquainted with diamonds, as evidenced by the Roman-era diamond rings still in existence. These diamonds, polished rather than faceted, look quite different from their dazzling and complex modern counterparts. Diamonds have a natural dodecahedral shape (an eight-sided polyhedron: picture two pyramids back-to-back). Polishing them this way was meant to accentuate that shape. Polishing would be done by rubbing two diamonds together, as nothing can scratch a diamond other than another diamond.

Diamonds became exceedingly rare again in the Middle Ages, but among the royalty of the day, they did not occupy a special place among the other cardinal gems (amethyst, emerald, ruby, and sapphire). British colonization of India, still then the world’s only source of diamonds, brought the gemstone into the British public imagination, as seen in Victorian-era works such as The Moonstone by Wilkie Collins. The fictional stone in the novel’s title is not a moonstone at all but a diamond, and a cursed one at that. The idea was likely inspired by the mythology surrounding the Hope Diamond, excavated in India in the 17th century and sold to Louis XIV of France.

The Hope Diamond, a 45-carat blue diamond, was also the inspiration for the Heart of the Ocean, the fictional jewel famously cast into the ocean at the end of the 1997 film Titanic. (I hope I didn’t spoil a 25-year-old film for anyone. Also: how was 1997 25 years ago?) The actual gem used in the film is a cubic zirconia, and the whole piece cost about $9,400. While The Heart of the Ocean is fictional, the real Titanic passenger on whom Rose is partially based, Kate Florence Phillips, was given a similar necklace by her fiancé Henry Morley. Phillips and Morley, like their fictional counterparts Rose and Cal Hockley, were engaged, but from there, their stories diverge drastically. Morley was married and 42, Phillips was 19, and they were running away to elope, and well…we were talking about diamonds, weren’t we? 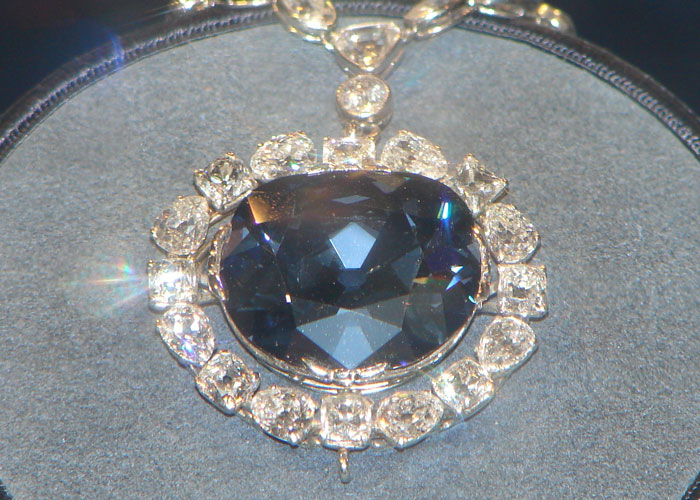 Until the discovery of diamonds in Brazil in 1726, India remained the world’s only source of diamonds. As Indian mines depleted, Brazil became the world’s main source of diamonds. The country’s dominance in the diamond trade lasted until the mid-1800s, when vast reserves were found in South Africa. It was this that discovery changed the diamond industry forever, creating the modern diamond market and the marketing machine that thrust diamonds into the American consumer consciousness.

Since then, diamonds have been discovered elsewhere in the world, including Australia, Russia, Canada, and all over southern Africa. Eira Thomas, a Canadian geologist, is credited with discovering diamonds in Canada not just once but four times in all. She first found diamonds almost 200 miles northwest of Great Slave Lake in the Northwest Territories, close to the Arctic Circle, where the temperature is -20°F on the March morning of writing this blog. The mine there would become one of the richest in the world. Thomas would go on to make the first discovery of diamonds in Quebec.

Operations like these are thoroughly modern, concerned with preserving a fragile arctic ecosystem and respecting the rights of First Nations people. Though still far from perfect, it is a much cleaner and more ethical operation than it would have been 150 years ago—or even 30 years ago—when the diamond industry exploited local resources and people without a second thought.

Today, as in the 19th and 20th centuries, extracting underground deposits is far more costly than sifting through river gravel was for ancient miners. Over 1,500 tons of earth, including one ton of kimberlite (the igneous rock from which diamond is extracted), have to be excavated to find one carat of diamond.

A clear, polished diamond has its own wintry beauty, but it would take modern technology to show us what beauty a diamond truly has inside it. Coinciding with the late-19th century Diamond Rush in South Africa, new technologies and techniques were being developed to create more complex, precise, and imaginative diamond cuts. With tools like the bruting machine and the motorized saw, lapidarists, like sculptors chipping away everything that doesn’t look like an elephant, learned how to best facet a diamond to bring out its natural optical properties. In 1919, Marcel Tolkwosky wrote the book on diamond faceting, working out mathematically in his book Diamond Design that the 57-facet brilliant cut is the perfect shape to maximize the diamond’s brilliance and fire.

But it wasn’t just greater supply and the development of techniques that took advantage of diamond’s optical properties that led to its sharp rise in popularity in the 20th century. After World War II, there was a concerted effort within the diamond industry to give diamonds to celebrities and create a link between diamonds and luxury, wealth, and romance. Everyone knows the famous slogan, “A Diamond is Forever,” even if they don’t know that it comes from a 1940s De Beers ad campaign. That slogan helped to cement the association between diamonds and marriage in popular culture. 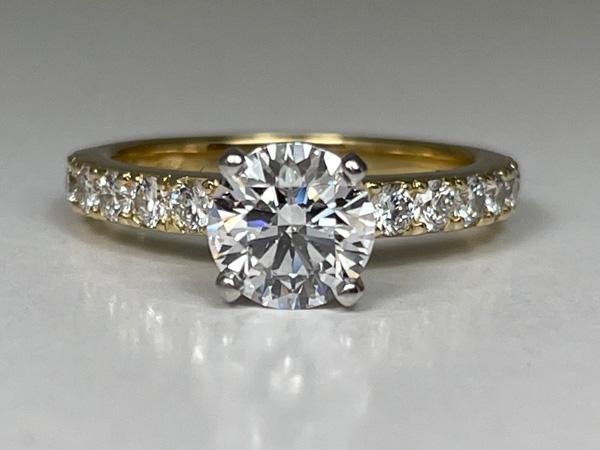 Marketing may have made us notice diamonds and attach positive emotions to them, but the beauty of an expertly cut diamond as the centerpiece of a finely crafted piece of jewelry speaks for itself. What gives diamond its unmistakable sparkle?

Diamond, unlike glass, has a high reflective index. Light doesn’t simply pass through a diamond-like it does through glass. Instead, it breaks up the rays of light that enter. A clear, colorless diamond lets the most light in, which gives the facets more light to refract and reflect. This firework display of color, light, and shadow is referred to as fire (the diamond’s ability to separate white light into its component colors) and scintillation (the patterns of light and dark that dance on the face of the diamond). 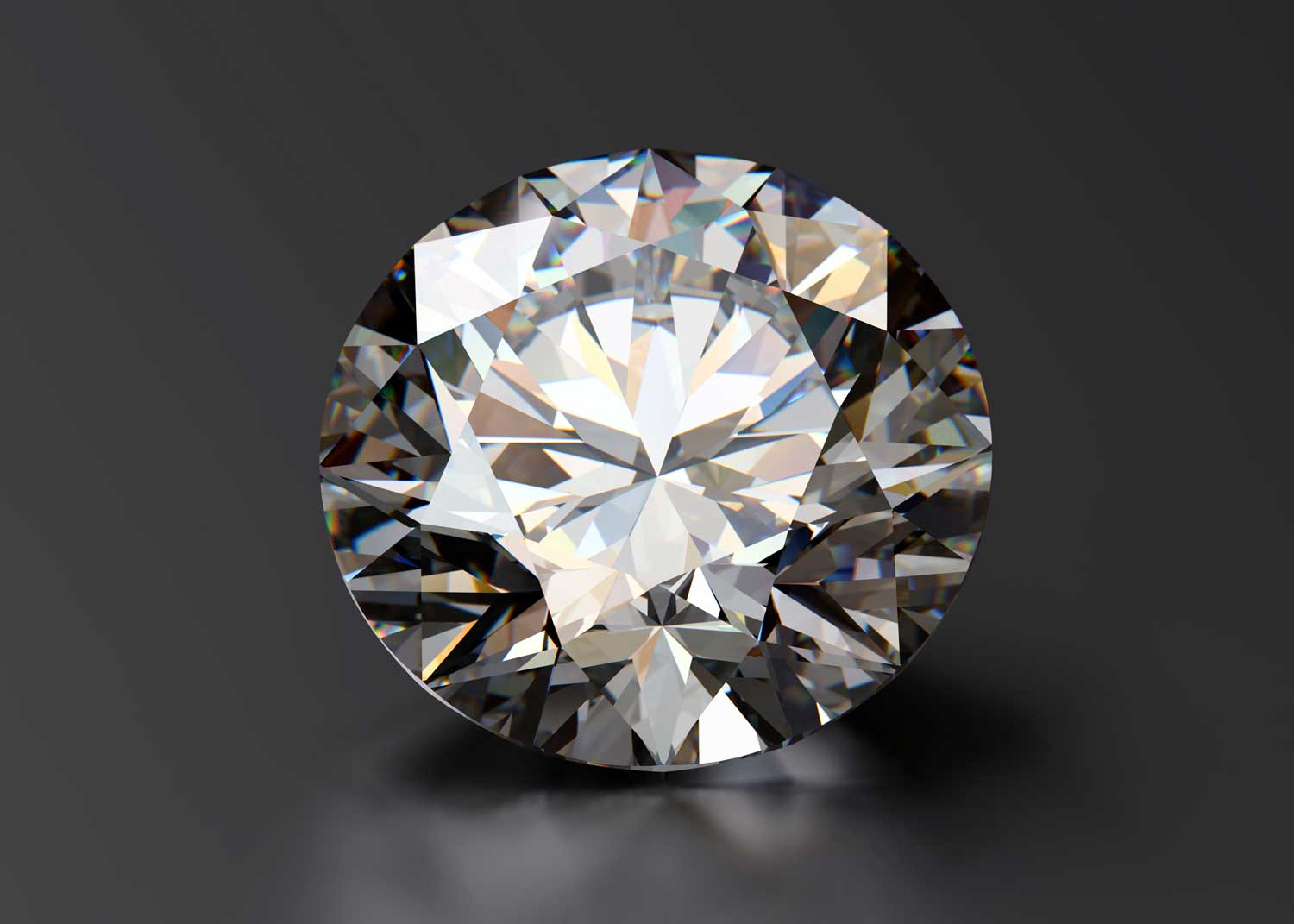 Diamonds are more than just beautiful. As the hardest natural substance (rated 10 on the Mohs scale), they are useful in a number of industrial and scientific applications. Being both hard and resistant to heat, diamond is often used in cutting tools and as an abrasive.

In October 2021, NASA launched a probe named Lucy into the sky with an instrument made of lab-grown diamonds. The headlines write themselves. The instrument in question, called L’TES, is a thermal infrared spectrometer that will help scientists determine the composition of asteroids and Trojans, which are asteroid-like bodies that share an orbital path with Jupiter.

Diamonds have gone from an obscure, quasi-mythical substance to a commodity synonymous with luxury. Reforms meant to make the industry more ethical and sustainable, the growth of the Indian and Chinese markets, and the rise of lab-grown diamonds are once again changing consumers’ relationships to the gemstone, making it even more accessible. It may have lost some of its rarity, but it will never lose its mystique or its grandeur.