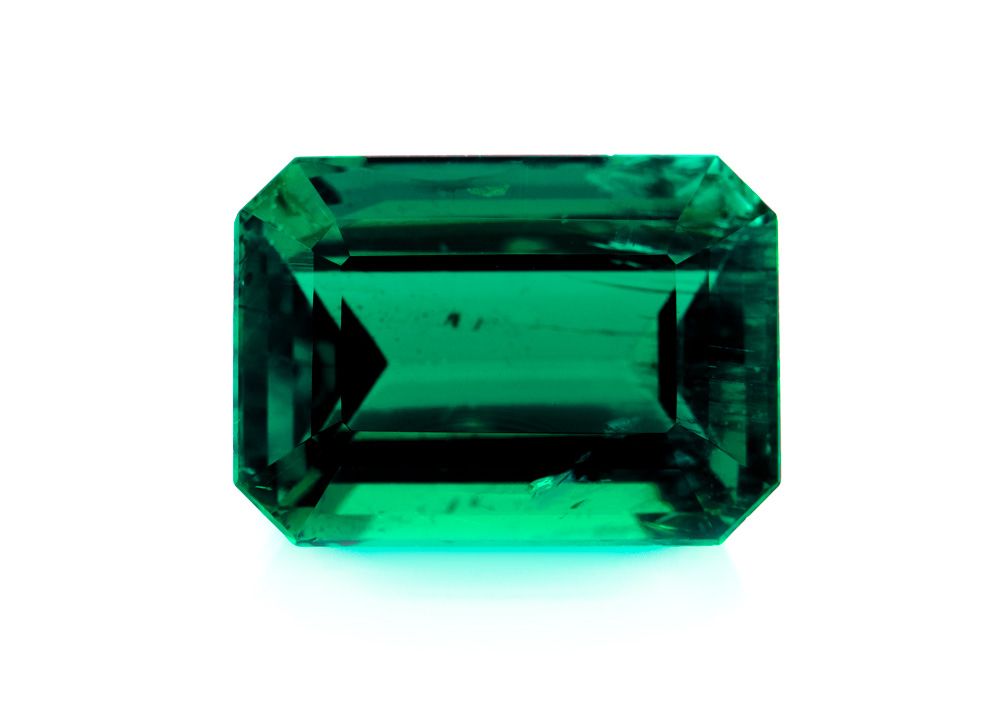 As the snow melts and the trees sprout leaves in May, we start to see the soothing, rich green of emerald all around us. If you feel the same sense of relaxation looking at an emerald that you do sitting in a green field in the springtime, it’s not just your imagination. Emeralds are said to relieve exhaustion and bring a sense of tranquility to the wearer, and like many of the properties often attributed to gemstones, this idea has some scientific basis.

Because the human eye can see green more easily than any other color, it is the color that best relieves eye strain. There is a reason accountants, telegraphists, and card dealers once wore green visors. Likewise, “green rooms” in theaters, though rarely still painted green, gave actors a place to rest and recuperate after spending so much time under bright stage lights.

A clear, deep green emerald has this same effect, drawing the eye deeper and deeper into its enchanting, soothing world.

Like February’s birthstone, aquamarine, emerald is a form of beryl. What sets these gemstones apart is their color: aquamarine is a light blue-green, the color of the sea, while to be classified as an emerald, a beryl must have a rich green hue. Medium green beryl is simply called green beryl. Where emerald ends and green beryl begins is a bit of a gray area (green area?), but you know an emerald when you see one. Both green beryl and emeralds are green, but emeralds are just…greener. Like Roman philosopher Pliny said, “nothing greens greener.” 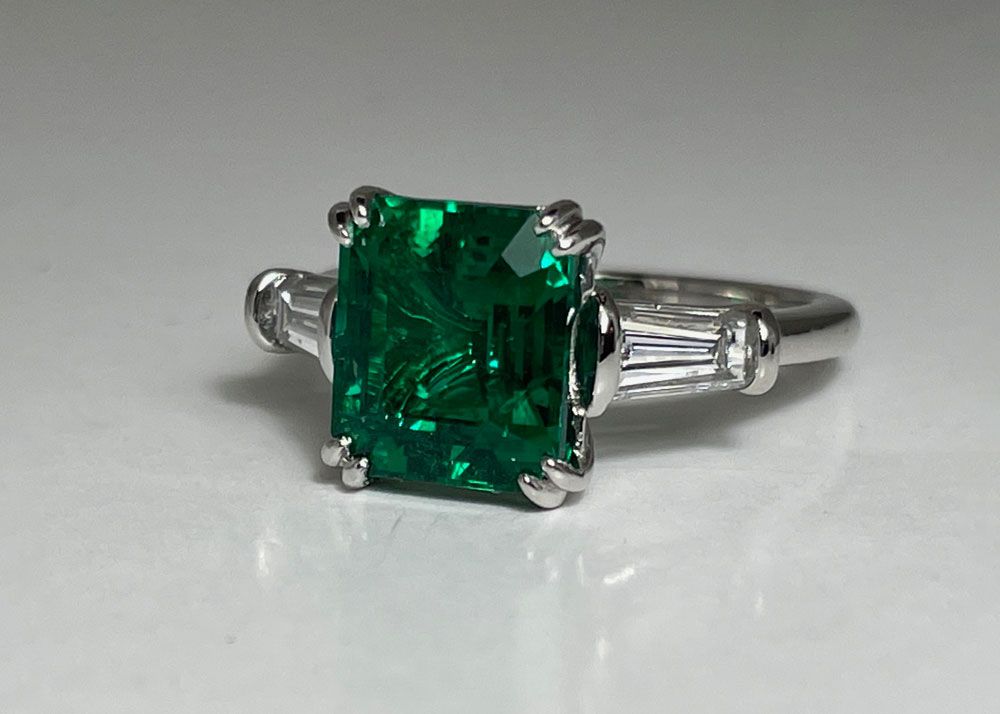 Emerald is a hard gemstone, rated at 7.5-8 on the Mohs scale. But hardness only indicates a stone’s resistance to scratching. You will come across very few things that can scratch an emerald, but the stone can be chipped or broken.

While emerald and aquamarine are both forms of beryl, emerald is far more brittle due to the presence of inclusions. Aquamarine, on the other hand, is a relatively pure crystal. Emerald is difficult, and sometimes impossible, to cut without damaging the stone, so emeralds are typically given a treatment called stabilization. Stabilization involves coating the gemstone with a microscopic layer of a protective colorless bonding agent.

Far from being flaws, however, inclusions are part of an emerald’s complex beauty. An emerald’s inclusion pattern is referred to as “jardin” or “garden” because under a microscope these inclusions can resemble dense foliage, like in the background of a Manet painting. Emeralds from different parts of the world will have different inclusion patterns, and gemologists can even identify where an emerald came from by analyzing its inclusions.

Where Are Emeralds Mined?

Beryl forms all over the world, and emeralds are mined in Central Asia, South America, Africa, Australia and the United States. The main sources of emerald are Brazil, Colombia, and Zambia, with the finest emeralds coming from Colombia. That country is also the origin of anywhere between 50 and 90 percent of the world’s gemstone-quality emeralds. Colombian emeralds are the product of tectonic activity deep below the Andes. The process removes inclusions and traces of iron from the crystal, resulting in a clear stone the perfect shade of deep green with a hint of blue, a color that can only be described as “emerald.” 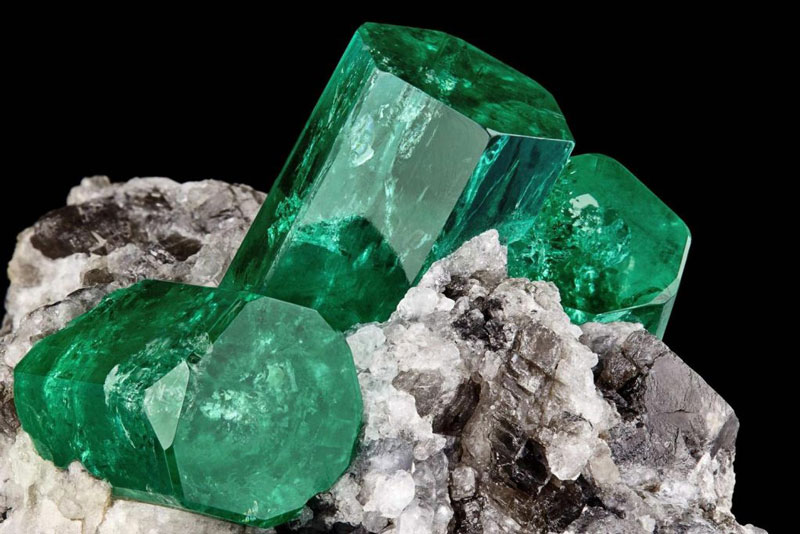 As one of the cardinal gems, emeralds were among the most prized treasures of royalties throughout history. From Alexander the Great, who wore an emerald in his belt for protection, to Cleopatra, and from Queen Victoria and Queen Elizabeth II, rulers throughout history have sought the type of vision emeralds were said to grant. The Roman Emperor Nero viewed gladiatorial games through emerald lenses, either to correct his nearsightedness or to protect his eyes from the sun.

Cleopatra’s love for emeralds may be rooted in the significance of the color green in ancient Egypt, where it was associated with the Nile and the seasonal floods that turned the desert green, making agriculture, and Egyptian civilization, possible.

Elizabeth Taylor found her own passion for emeralds while portraying the Egyptian queen on the big screen. Though anyone who was around in the 90s might associate her with diamonds because of those ubiquitous perfume commercials, her platinum and emerald necklace was part of one of her iconic looks. The Bulgari piece, a wedding gift from Richard Burton, contains 16 Colombian emeralds, each one surrounded by diamonds and included an emerald pendant that could also be worn as a brooch. The brooch alone fetched $6.5 million at auction after her death. 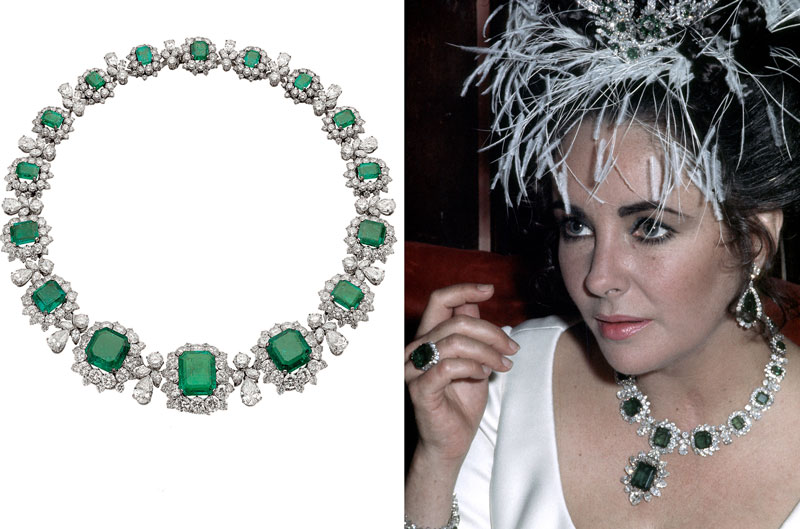 Elizabeth Taylor's Bulgari necklace in platinum with emeralds and diamonds

While the beauty of an emerald is often allowed to speak for itself in a step cut, some of the most famous and beautiful emeralds are carved Mughal emeralds. One such brooch, purchased by Jacques Cartier and set in a platinum and sapphire setting in the 1920s, features an octagonal emerald decorated with an elegant, intricate floral pattern designed by an unknown Mughal craftsman in the 17th century. Cartier had traveled to India to sell to wealthy aristocrats there, but he returned to his London studio with many examples of Mughal art that he incorporated into his own unique pieces.

An even more famous Mughal emerald is the Mogul Mughal, a 217-carat emerald 2 inches long and 1.5 inches wide. One of the largest emeralds known, one side is engraved with Islamic calligraphy, while the other features an intricate poppy pattern. Indian artisans of the Mughal era did incredible things with emerald, from carving little drinking vessels to emerald spectacles.

The strangest emerald of all has to be the Bahia Emerald, currently in the custody of the Los Angeles County Sheriff’s Department. The story of the 752 lb., 1.7 million carat emerald is a bizarre and convoluted one that includes claims of ownership by over a dozen people and groups including the nation of Brazil, four lawsuits, a bankruptcy, and a kidnapping. I suggest giving it a google. It’s a fascinating story.

These are just a few of history’s many-storied emeralds. As one of the cardinal gemstones, emerald has enchanted royalty for millennia. I’m happy to make everyone feel like a king or queen under the protection of emerald’s tranquil, life-sustaining glow.