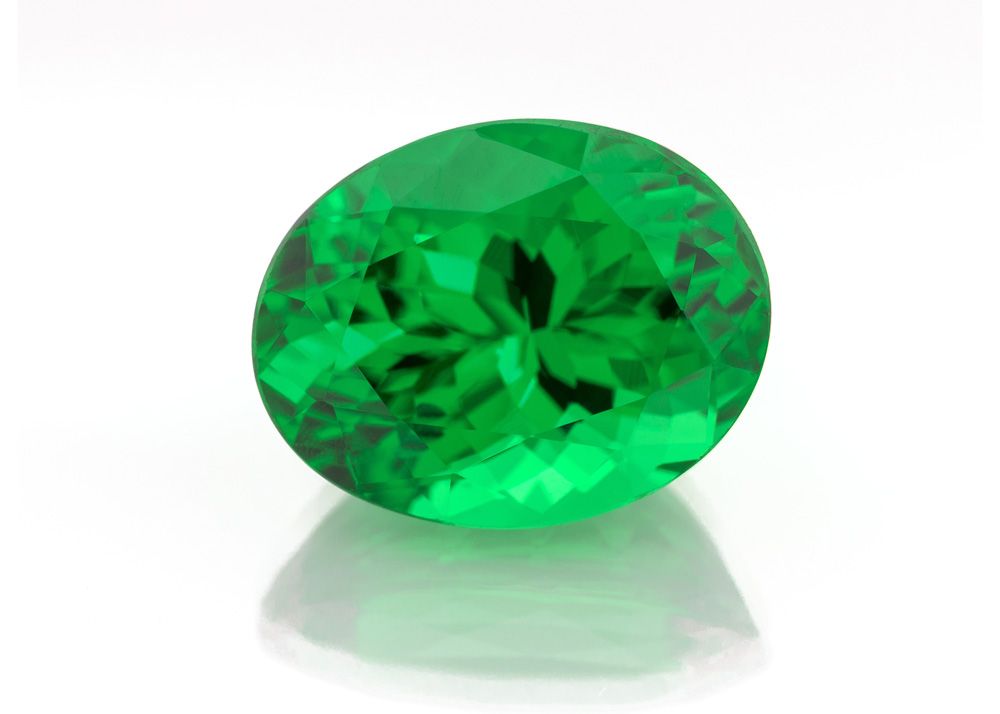 Few gems match the pure, rich green of emerald, but the tsavorite variety of garnet comes close. When we think of garnet, we probably think of a gemstone ranging in color from caramel brown to pomegranate red, but garnet appears in just about every color of the rainbow. Tsavorite, which ranges in color from olive to evergreen (the latter being the most valuable), is one of the rarest shades of all—and one of the rarest gemstones in the world.

As we discussed in a previous blog, garnets were a popular gemstone throughout history, with their popularity peaking during the Victorian era, after which they fell out of fashion for a while. But the discovery of the tsavorite variety of garnet helped bring the market for garnets back to life in the 1970s.

All varieties of garnet are silicate minerals, but their varied colors are a result of different elements bonding with the silicate crystal. There are six species of garnet in all, and tsavorite is a variety of the grossular species. Tsavorite gains its emerald-green color from the presence of trace amounts of vanadium or chromium. You can read more about garnets and their geological and gemological properties here.

The story of tsavorite is one that begins with a glimmer of beauty and ends in tragedy for the man who discovered it. Scottish geologist Campbell Bridges, who had lived nearly his entire life in Africa, wasn’t like other foreign speculators in sub-Saharan Africa. Having lived there since the age of three months, he considered himself African, and he established close relationships with the locals, preferring to hire people native to the area as managers in his company rather than bring in outsiders.

Bridges made two groundbreaking discoveries in the 1960s. The first of these he wasn’t so much responsible for discovering as for popularizing. While living in Tanzania in 1967, he came across strange purplish stones, almost like sapphires, being sold in bazaars in Tanzania. The stone, which would later be given the name tanzanite, was unknown outside this small corner of Tanzania, but that’s a story for another blog! 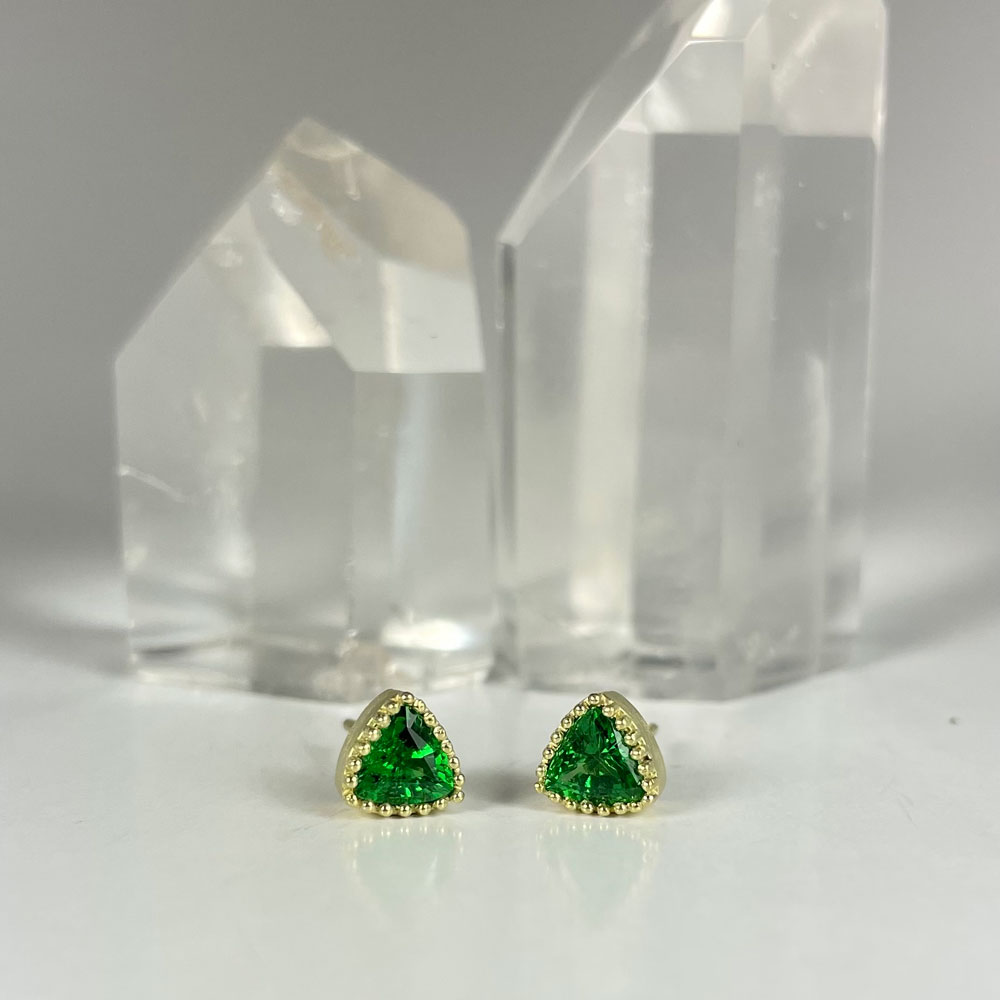 The second of Bridges’s two incredible discoveries to make it to market was tsavorite. As the story goes, a cape buffalo (you know the one: big angry eyes on the front of its face, horns that curl from the top of its head like a deadly, massive handlebar mustache), charged him, and he dove into a gully to escape. Lying there in the dust, he spotted the glittering green stone for the first time but was unable to examine it more closely. After Tanzania nationalized their mining industry, Bridges moved to neighboring Kenya, where he discovered more of the stone that would become famous around the world as tsavorite, and opened his own mine in 1971.

Tsavorite was the first newly discovered stone to be considered “precious” since…well, since forever. The others—diamonds, emeralds, rubies, and sapphires—had been known and loved since antiquity. Tiffany & Co. set out to create a market for the new and rare gemstone. The rugged and resourceful Bridges was to be a key component of Tiffany’s campaign marketing, which began in 1974; they even suggested naming the new stone Campbellite. Bridges insisted the honor belonged to Kenya, and to the place the gemstone had been discovered: Tsavo National Park.

After years of success in mining in Kenya, years in which he established close relationships with the locals, he ran afoul of a group mining illegally on his property. When he confronted them, he was stabbed and killed. His tragic death in 2009 came as a shock to everyone in the jewelry industry, as he was a beloved colleague to many. 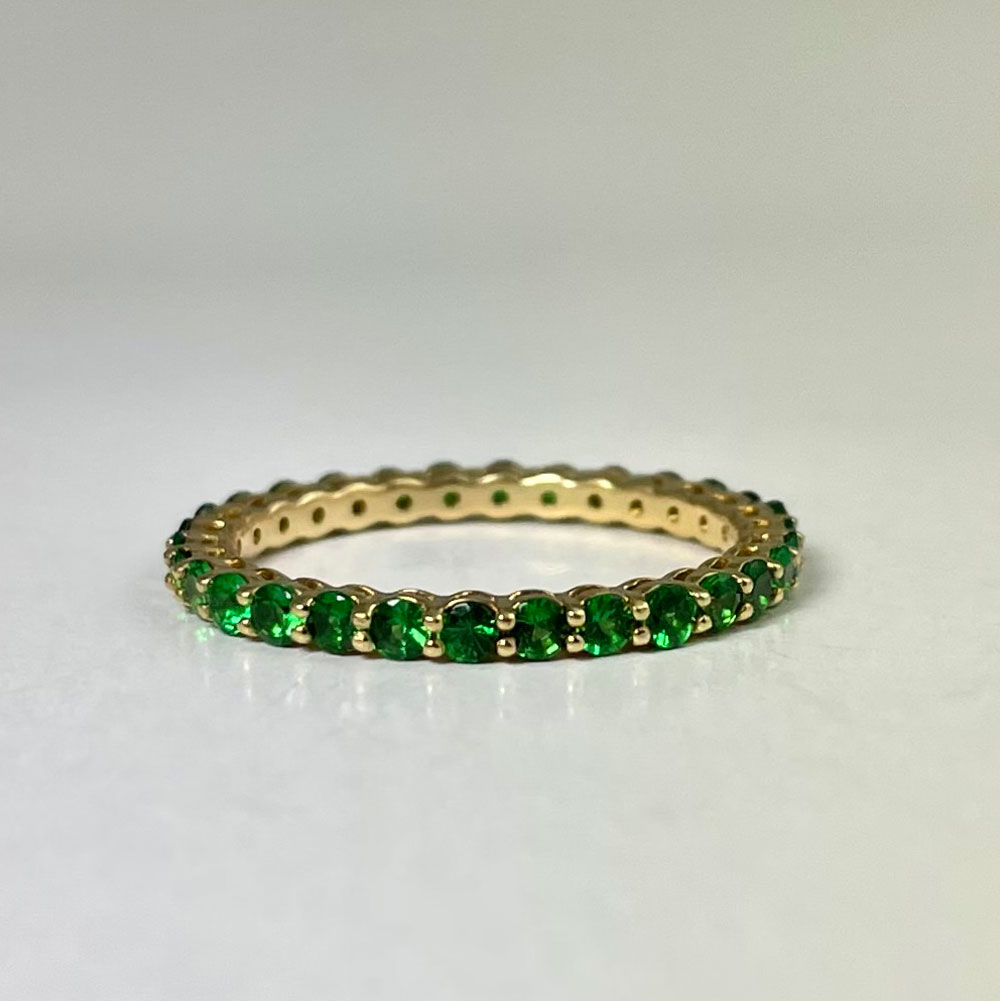 To this day, tsavorite remains an exceedingly rare gemstone. Aside from Tanzania and Kenya, it has only been discovered in Madagascar, Pakistan, and Antarctica. Why would such a rare mineral be found in such disparate locations? Because 200 million years ago, East Africa, the Indian subcontinent, and Antarctica were all connected. Tsavorite is found in the location where these three land masses split from one another.

A slow, ferocious geological event—too slow to notice as it happened—that tore three continents away from each other over the course of millions of years gave us one of the rarest and most beautiful gemstones in existence. Gemstones show us that beautiful things can arise out of unbearable circumstances. There is no clearer expression of this idea than tsavorite.